We will miss you Chris 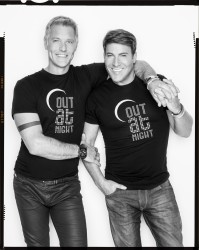 Egale Canada Human Rights Trust wishes to extend our sympathies to the family and friends of Christopher Hyndman, Canadian gay icon, accomplished designer, and spokesperson for LGBTQ rights in Canada.

Hyndman, of CBC’s Steven & Chris fame, was raised in Newfoundland, sometimes citing his mother’s sense of style as the original inspiration for what would lead to an immensely successful design career with his partner Steven Sabados. Hyndman and Sabados co-starred in numerous Canadian television shows including Design Guys, Design Rivals, So Chic with Steven and Chris, and daytime talk show Steven and Chris.

Hyndman used his public persona as a platform to support many LGBTQ issues in Canada. Not only did Hyndman provide positive LGBTQ representation through his television work, he also involved himself in charitable efforts including Egale’s own OUTatNight campaign this past spring, which raised money for Canadian LGBTQ2S youth experience homelessness.

Today Egale joins the Canadian LGBTQ2S community and our allies in mourning the loss of a role-model, icon, and friend who will be missed by many.